Five of the College’s leading faculty members have been honored with the 2018 Michael E. DeBakey, M.D., Award for Research Excellence, which recognizes their significant published scientific contributions to clinical or basic biomedical research over the past three years. Their work has not only advanced their own fields of study, but it also is truly representative of the depth and breadth of research at Baylor College of Medicine. 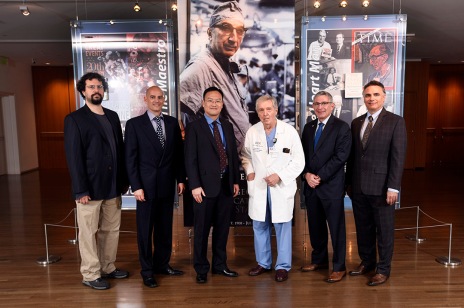 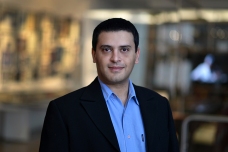 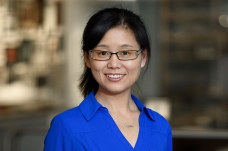 The award, named in honor of the college’s first president and pioneering heart surgeon Dr. Michael DeBakey, was presented to the recipients at a ceremony and symposium May 8. Sponsored by the DeBakey Medical Foundation, it includes a commemorative medallion and funds to support further research.

“This award is named for one of the most innovative minds of the last century, so it’s fitting that it is awarded to the top investigators at our institution,” said Dr. Paul Klotman, Baylor president, CEO and executive dean, who presented the awards along with Dr. George Noon, professor of surgery, the Meyer-DeBakey Chair in Investigative Surgery and president of the DeBakey Medical Foundation.

Dr. Adam Kuspa, vice president of research at Baylor, introduced each award recipient, who then gave a presentation on his or her work.

Dr. Erez Lieberman Aiden is revolutionizing the study of how the human genome, at more than 2 meters long, folds up to fit inside the cell nucleus, and how this process governs gene regulation. His lab has made a series of transformative discoveries: the compartmentalization of the human genome inside the nucleus; developing the first map of loops in the human genome and discovering how their positions are encoded; the demonstration that these loops form by extrusion, which has enormous consequences for the enzymology of DNA and which is now almost universally accepted; the ability to perform 3-D surgery on a genome by manipulating this code to control the extrusion process; and a method for assembling new, Human Genome Project-quality genomes for $1,000.

Dr. Karl-Dimiter Bissig focuses his research on human liver disease and human disease modeling, including developing the first xenograft model for metabolic liver disease. This mouse model more closely resembles human disease modeling, offering the ability to validate human experimental therapies. These new models are of particular relevance to macromolecular therapies, which are sequence or epitope specific, and cannot be validated in experimental animal models. This process supports the rapid translation of therapy from lab to clinical trials. In addition, he and his team were able to functionally inactivate murine cytochrome metabolism in humanized mice to demonstrate human-specific drug metabolism in a mouse model. His results will likely influence drug development and toxicity in a broad sense since most drugs are metabolized through the liver.

Dr. Atul Chopra’s work focuses on metabolism and energy homeostasis. He studies how energy enters the body and how it is used once it’s in the body, which usually involves an interplay between several organs and thus requires a whole-body experimental approach. His work on Neonatal Progeroid Syndrome, a condition characterized by energy balance problems resulting in extreme thinness and propensity for hypoglycemia, led to the discovery of a new glucogenic and orexigenic hormone, asprosin, which represents a new direction in the understanding of Marfan syndrome and the study of fibrillin. Asprosin has the potential for beneficial therapeutic impact of activity blockade via monoclonal antibody. In addition, antibodies targeting asprosin are showing considerable promise by acutely lowering blood glucose and appetite, leading to improvements in type II diabetes and obesity, respectively, over time.

Dr. Meng Wang has developed a successful innovative multidisciplinary research program that has produced original contributions to the fields of aging biology, lipid metabolism and reproductive biology. Her laboratory uncovered the first lysosome-to-nucleus retrograde lipid messenger pathway, provided in-depth biochemical mechanisms for its action, and demonstrated its novel roles in regulating longevity. Her studies offer direct translational impact as they identify new nutrient-based approaches to increasing health span. In the area of reproductive fitness, she conducted the first genome-wide RNAi screen for gene inactivation that induces reproductive longevity, and identified a list of new genes associated with endocrine control of reproductive aging. Given the increasing trend of delayed childbearing in our current society, her discoveries are timely and lay critical foundations for improving reproductive health in humans.

Dr. Xiang Zhang has focused the efforts of his lab on the biological mechanisms and therapeutic strategies of metastasis, the major threat to the lives of solid cancer patients. These efforts resulted in the development of a set of unique techniques and models to study the interaction between microscopic metastases and various stromal components in different organs, particularly in the bone. These investigations have subsequently led to the discovery of osteogenic cells as the major microenvironmental components that promote early-stage of breast cancer-bone colonization. Zhang is also studying the interactions between cancer cells and various immune cells. A breakthrough contribution to his field has been the discovery and characterization of a mutually regulatory loop between tumor vasculature and adaptive immunity, which offers compelling therapeutic strategies.