Five Baylor College of Medicine faculty members whose work represents the college’s most significant published scientific contributions to clinical or basic research during the past three years have received the Michael E. DeBakey Excellence in Research Award. 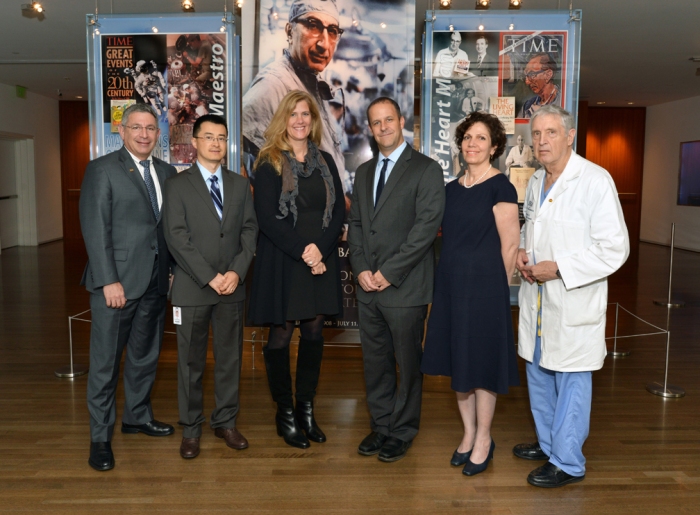 The award, named in honor of the college’s first president and pioneering heart surgeon Dr. Michael E. DeBakey, was presented to the recipients at a ceremony and symposium May 6. Sponsored by the DeBakey Medical Foundation, it includes a commemorative medallion and funds to support further research.

“Collectively, these scientists represent a tremendous breadth and depth of research Even more importantly, they represent the type of excellence in research that is one of the core missions of Baylor College of Medicine,” said Dr. Paul Klotman, president, CEO and exeuctive dean at Baylor.

The award recipients were introduced by Dr. Adam Kuspa, vice president of research at Baylor, who provided an overview of their research.

Aagaard’s work examines the effect of in utero exposures on the health of generations of offspring, particularly in the field of obesity. Her widely cited paper on the placental microbiome appeared in the journal Science Translational Medicine and showed that the placenta harbors a rich community of microorganisms, a finding that has implications for normal and abnormal pregnancy outcomes, including premature labor.

“The work of Dr. Aagaard, a recipient of the NIH Director’s New Innovator Award in 2007, brings us knowledge that can be clinically applied to improve the health of generations to come,” Kuspa said.

Deneen has focused his most recent work on developmental gliogenesis and how this process applies to glial-based diseases of the central nervous system. This translational approach has focused on the NFI (nuclear family 1) transcription factors, and he recently found that NFIA is regulated by the transcription factor SOX9, which mediates the genesis of glial cells. He went on to identify this unique set of genes that regulate key aspects of the molecular processes that control glial generation. From there he determined the roles of NFIA expression and the proliferation of glial precursors, both during development and tumor initiation. A new mouse model enabled him to better understand the role of NFIA in the generation of glioma subtypes and thus to argue for the convergence of development and cancer.

Kheradmand has devoted her professional career to the study of emphysema, the third leading cause of death in the United States. With most of her clinical work taking place at the Michael E. DeBakey VA Medical Center, she has used patient samples to characterize the immune makeup of those who have this deadly disease, contributing to the pipeline for translational research at the DeBakey VA Medical Center. Using a pre-clinical model of emphysema in mice, she has found that the product of T-cells in the emphysema-stricken lungs start the chemical cascade that results in focal lung collapse, a hallmark of the disease. A second study demonstrated the autoimmune basis of emphysema and a third showed that reduced levels of peroxisome proliferator-activated receptor gamma in smoker’s lung promotes emphysema through the release of a particular cytokine that enhances the autoimmune effect. In addition, work with her collaborator Dr. David Corry, professor of medicine at Baylor, has enabled her to make seminal discoveries in the area of asthma.

“The work of Dr. Kheradmand has major implications for the future understanding and treatment of major lung disease,” Kuspa said.

Lichtarge, who is director of the Computation and Integrative Biomedical Research Center, focuses his computational work on the molecular basis of protein function and interaction, the design of peptides and proteins with new functions and the interpretation of genome variations in health and disease. In a recent paper, he and his colleague showed how high throughput of functional information such as protein expression and interaction can be integrated into a single gene network.

They invented a compression technique to shrink the size of the network, using it to determine the molecular function of the malarial gene Exp-1 as a glutathione-s-transferase. This led to the discovery that artemisinin, the malaria drug of choice, inhibits the activity of this gene – important because the drug is an herbal derivative of unknown mechanism to which malaria in southeast Asia is becoming resistant.

In a second paper, Lichtarge and his colleagues took on the problem of “big literature” using the protein p53 as an example. They developed a technology tool based on IBM’s Watson supercomputer and mined the scientific literature to extract important data related to the protein.

A third paper took on the most basic problem in biology – how phenotype relates to genotype, and n practice, it shows how to best interpret exome variations among individuals to bring about the personalization of medicine.

Xin’s research has concentrated on the initiation of prostate cancer as it is affected by inflammation that alters prostate lineage differentiation. His work has identified the dual nature of the Notch protein in prostate disease – suppressing proliferation of the prostate basal cell while inducing luminal cell hyperproliferation, showing how this critical protein affects prostate cancer initiation.

“Dr. Xin’s work provides a critical insight into the nature of prostate cancer in an area that has been understudied, and his future work promises to bring new clarity to prostate stem cell biology and the metastasis of this difficult disease,” Kuspa said.