It began with “Keep Yourself Alive” and ended with “We Are the Champions.” No, not the hit movie “Bohemian Rhapsody,” but a jam-packed House of Blues performance by Baroness, a local Queen tribute band.

At the Aug. 15 show, Chris Lopez, administrative support coordinator with Business Support Services at Baylor College of Medicine, was seen rocking out on the drums along with his Baroness bandmates.

The crowd of about 1,200 people sang in unison as the band played a range of Queen hits, including “Don’t Stop Me Now,” “Bohemian Rhapsody” and “We Will Rock You.”

However, this was not Lopez’ first experience with musical performance – far from it, in fact.

“C-Lo,” as Baroness lead vocalist Raquel Buena affectionately calls him, started playing drums at age 12 and got his first drum set by age 13. His biggest inspirations, besides Queen, of course, are the Beatles, Elton John, the Ramones and anything Motown. 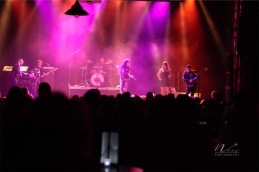 “As a teenager, I performed with bands and at talent shows. I went from doing cover bands and original music to joining the tribute band scene a few years ago when I was approached by some mutual musicians in Houston.”

Around the same time he began working at Baylor in fall 2018, Lopez was asked if he would like to audition for Baroness. As a longtime Queen fan, he couldn’t resist the opportunity.

“The group came together quickly,” Lopez said. “All of the musicians in Baroness are very experienced and come from different musical backgrounds. We’re big Queen fans and have a passion for music and a lot of knowledge as far as the local music industry goes.”

The band played their first show in October 2018. The rising popularity and acclaim of the “Bohemian Rhapsody” movie was perfect timing for Baroness’ emergence.

“The response has been really overwhelming. Most people know Queen’s songs and melodies, but not necessarily the band behind it. The movie was instrumental in reintroducing the public to the band.”

At Baroness’ show on Aug. 15, the diversity of Queen’s fandom was on full display. Families, longtime fans and new fans who had recently been introduced to Queen’s extensive discography, were all in attendance.

“We go out of our way to present the Queen experience as accurately as possible. Our frontwoman wears stage costumes and studies a lot of the performances and mannerisms. The response has been positive, and we are grateful for that.”

Former co-workers have seen Lopez perform. He says they are often surprised by his performances because he is normally a quiet and reserved person.

“I am exactly the opposite of that on stage.”

In addition to performing with Baroness, Lopez also plays bass in a Ramones tribute band and drums in a R.E.M. tribute band.  He typically has two to three rehearsals per week and performs at shows every other weekend.

Baroness has partnered with the Mercury Phoenix Trust, an HIV/AIDS charity organization that was created by the living members of Queen after lead vocalist Freddie Mercury passed away in 1991. Lopez says the band is gaining steam, and will continue playing shows across the Houston area.

“It’s enriching to have an outlet to express myself and an incredible feeling to be able to share that with an audience. We want to touch as many people as possible by sharing the music of Queen.”