On a Wednesday afternoon in early March while many of their classmates prepared for induction into a medical honor society, fourth-year medical students Carrie Dempster and Zachary Bennett snuck away to pledge their love and commitment to one another. The intimate wedding ceremony on campus was just steps away from where they met four years prior.Presiding over the ceremony was Dr. Joseph Kass, associate dean of student affairs in the School of Medicine.

The couple wanted to commemorate how they met and the importance of Baylor College of Medicine in strengthening their relationship through trials and tribulations by having the small ceremony on campus ahead of their May 12 church ceremony. In addition, it allowed Carrie time to legally change her name prior to the start of residency training. 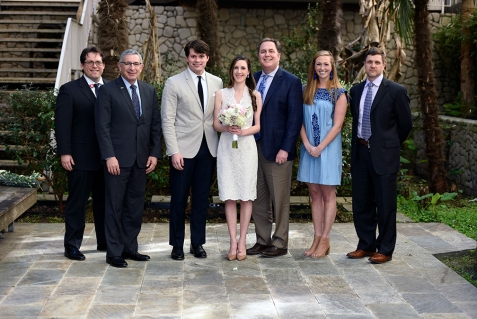 Rewind to four years ago when the couple met as college seniors during Baylor’s Second Look event, where accepted students are invited for a second visit to Baylor ahead of making their final decision on which medical school to attend. Carrie had not made her final decision prior to the event, and the couple likes to think that Zach subconsciously played a role in the decision making.

When they began their first year of medical school in the fall, they lived in the same apartment complex and would ride the shuttle to school together every day along with a few classmates. They began studying together and their friendship gradually turned into a relationship. Zach proposed to Carrie in July 2017 while she was doing a maternal fetal medicine rotation at Northwestern University Feinberg School of Medicine in Chicago.

The couple wished to keep the campus ceremony private, only inviting matron of honor and fellow fourth-year student Hallie Bradley, Kass and a few other deans from the School of Medicine. Baylor President, CEO and Executive Dean Dr. Paul Klotman surprised the couple by attending the ceremony, even joking that he was stepping in as best man. The ceremony was held in a small courtyard on campus, only a few feet away from where they first met.

“The ceremony was meaningful to us as it truly represented the support of the Baylor community as we made a commitment to each other,” Carrie said.

Kass, who also is an ordained minister, was a natural choice to preside over the ceremony. The couple met Kass during their first year of medical school, and Zach immediately found a lifelong mentor in Kass.

“Dr. Kass’ optimism balanced our cynicism, and his advice throughout our time with him as associate dean of student affairs was essential for our academic and personal well-being,” Carrie said. “Dr. Kass’ advocacy for his students is unparalleled, and we couldn’t think of anyone more befitting to take part in our ceremony.”

“I have gotten multiple glimpses of your relationship over the last few years, during our discussions of your residency application strategy and more recently when we met to discuss your rank-list strategy for the couples match,” Kass said at the ceremony. “Through our discussions, I saw two very driven, accomplished and ambitious people with equally outstanding academic records talk about your willingness to match at places where you as individuals would never need to consider matching if you were flying solo. Why? Because you were putting your partner’s interests above your own. You shared the risks and benefits equitably – no one being coerced into assuming a greater burden than the other – but you prioritized ‘us’ over ‘me and you.’ Therefore, I have no doubt that your love is powerful, your commitment to each other profound, your readiness to enter into marriage unshakable.”

The couple enjoyed some cake with their guests before heading to meet their classmates for yet another special ceremony – their induction into the Alpha Omega Alpha Honor Medical Society.

On May 12, they celebrated with family and friends at a church ceremony in Plano, Texas.

This July, Carrie will begin her residency training in obstetrics and gynecology at Cleveland Clinic and Zach in otolaryngology at Case Western Reserve University School of Medicine.

Carrie and Zach share a moment at their off-campus wedding.

Read about a special moment that another graduating student, Sonny Nguyen, shared with Dr. Michael Belfort, professor and chair of obstetrics and gynecology.