Orthotics and prosthetics student Sarah Bradley has been running since high school when she joined the cross country team. She later discovered a passion for marathons and has participated in the pinnacle of long-distance events, the Boston Marathon, three times, including in April 2017.

Each time, the Boston Marathon experience has left a mark on her because of the physical and mental challenge and the spirit of the Boston people who cheer on the runners.

“The experience was incredible,” she said of the 2017 race. “Thousands of spectators line the streets to cheer; I don’t believe there was a single silent moment throughout the whole 26.2 miles. There is a giant hill called Heartbreak Hill right at mile 21 that is a doozy. It’s tough and I was tired, but the spectators and other runners’ encouragement is what got me to the top.” 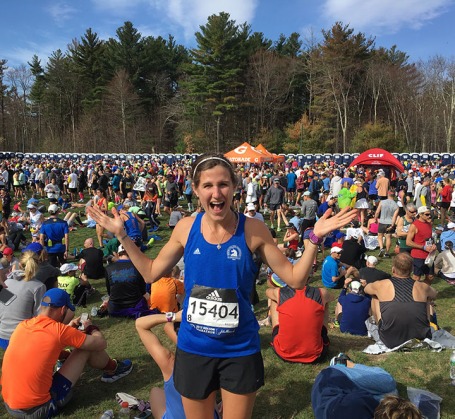 Sarah Bradley at the Boston Marathon! 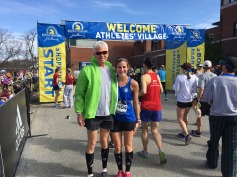 Celebrating completion of the marathon.

As someone studying in the O&P field, it’s hard for Bradley not to think about the Boston Marathon bombing in 2013 that resulted in the loss of limb for many people.

“I think what inspired me from the events that occurred that day was the resilience and strength of the city of Boston, runners and those affected. Some of the individuals who lost their limbs that day went on to compete in the Boston Marathon in the years following. It is hard for me to fathom the amount of strength, determination and resilience of those individuals,” she said. “As someone studying O&P, my future role is to provide people with the devices they need to live their lives to the fullest. The strength, drive and spirit is all within the individual.”

As for her own motivation, Sarah draws strength from her dad, also a marathoner, and from friends and family who support her goals. She admits that training is a significant time commitment, especially while undertaking a rigorous graduate school program. She tackles it with shorter weekday runs, reserving weekend mornings for long runs. For those interested in taking up running or committing to a long-distance running event, she suggests running with a buddy or group – it fosters accountability and makes the time go by faster.

For anyone considering running a marathon, Sarah says it’s a lot like life.

“You just have to take it one step at time and keep moving forward. It will hurt and you’ll get tired but it’s all about taking that next step and trudging along until you reach the finish line.”