Before the advent of modern communication, pigeons are said to have been used to send messages across long distances. Today, some special pigeons at Baylor are delivering messages of another sort – important information about what’s going on in the brain during navigation.

Postdoctoral research associate Nele Lefeldt with one of the pigeons.

“Pigeons have sort of a built-in GPS that uses the Earth’s magnetic field to help them navigate. By studying the mechanisms in their brains that are triggered during flight, it could lead to a better understanding of the human brain in diseases like Alzheimer’s, where people often lose their sense of orientation, and may also have practical, technological applications,” said postdoctoral associate Nele Lefeldt, who is leading the project in the lab of Dr. David Dickman, professor of neuroscience at Baylor.

The pigeons are housed in a loft – called the Pigeon Penthouse – on the rooftop of the radiology services building, and many Baylor employees in surrounding buildings have views of the daily activity at the loft and hear the whistle that signals feeding time for the birds.

There are currently 22 pigeons in the loft. The older birds are outfitted with tiny backpacks that hold GPS devices. Each morning, they are released for their daily flight – usually from a nearby location but sometimes from as far away as Galveston. Lefeldt tracks the birds through an app on her phone linked to their GPS devices, receiving data that tells her of their location.

They usually fly quickly back to the general area of the loft from wherever they are released – they are homing pigeons so that is their natural instinct. The 10 a.m. feeding serves as further motivation to return. Eventually each pigeon will be paired with a mate, and one pigeon will be released for flight while its mate hangs back at the loft – again, further motivation to return home.

From time to time, though, a pigeon loses its way. One day, for example, one of the pigeons took its time returning to the loft. Lefeldt was able to track the pigeon’s location to the Galleria, just hanging out of the roof of a shoe store and then the Cheesecake Factory. Who doesn’t like a good piece of cheesecake?

Another time, Lefeldt got a call from a police officer who had one of the pigeons, Edgar Allen Poe, in custody. The pigeon was on the ledge of an office building, and the worker inside the office found it odd that a pigeon had on a backpack. The police were called, and the officer who responded quickly found Lefeldt’s contact information on the backpack and called her to retrieve the pigeon.

Lefeldt laughs that she texts her wayward pigeons to come home, just like a parent does with their teenager. Of course, she’s not really texting, just using her app to determine their location. Pigeons are smart, she emphasizes, so she’s confident they will make their way back to the loft.

The next phase of research will have the pigeons wearing little helmets to track their brain activity during flight. Lefeldt knows from her experience with the backpacks that it will take some time for the birds to get acclimated to their new accessory. She handcrafted the backpacks from materials from a craft store, and admits the pigeons did not like them at first, even though they only weigh 20 grams and are completely safe for the pigeons.

Lefeldt and her research colleagues will be looking for which areas of the pigeons’ brains are active during flight, and what neurons and cells are involved. Pigeons’ brains are similar enough to the human brain to provide valuable information that can be applied to human disease research. 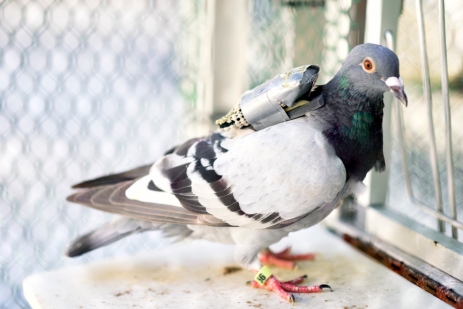 A pigeon with its backpack.

Lefeldt “texts” the birds to find out their location. 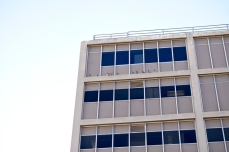 Hanging out at Baylor. 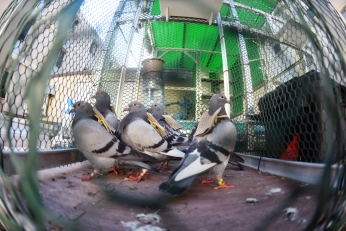 Hanging out in the loft.

While researchers know already that pigeons use the Earth’s magnetic field to navigate – something that humans cannot do – just how the birds “see” the field is only now being determined. Dickman has published research that shows that pigeons sense the magnetic field through cells in the inner ear.

Understanding how pigeons see or sense the magnetic field and what areas of their brain are triggered during navigation could not only contribute to research into Alzheimer’s and other diseases of the brain but could lead to development of new navigational technology, for example, technology that could provide guidance during a mining accident, where GPS cannot reach.

The Baylor pigeon research currently is funded for five years through a grant from the National Institutes of Health but has the potential to be an even longer project. Lefeldt says it calls for patience – it requires many steps before data collection even begins, including the breeding and training that already have occurred, plus more on the horizon as additional birds join the loft.

She is not new to working with birds, however, and fortunately is quite fond of the small creatures, as evidenced by their clever names – the ornery Edgar Allen Poe, Boomerang, The Raven, Roland Garros (there’s a tennis fan in her lab), Maverick, and for Texans fans, Arian Foster (hope the Arian bird doesn’t get injured) and, of course, JJ Watt. He’s probably the strongest and best looking of the bunch.

As a graduate student in her native Germany, Lefeldt was involved in research on migratory song birds and their use of the magnetic field for navigation. But she was familiar with birds even before that, as her family had a pigeon loft when she was younger.

Lefeldt knows enough about pigeons and other birds to know that it’s not really an insult if someone calls you a bird brain.

“Pigeons are very smart, and their brains are really not so different than ours.”

One thought on “Pigeon research isn’t for the birds”