After receiving the exciting news that the major scientific journal Cell had accepted their research paper for publication and wanted them to produce a video to promote it, researchers in one lab at Baylor took the honor seriously and vowed to create a fun video to tell the complex story of how our genomes fold three dimensionally. 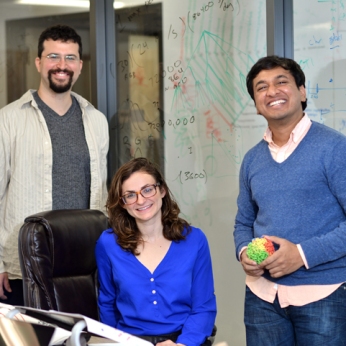 The team delivered on that promise and in February took home a coveted 2015 Lab Grammy for Best Education Video from BioTechniques, the International Journal for Life Sciences Methods.

Suhas Rao, Sarah Nyquist and Ivan Bochkov, all members of Dr. Erez Aiden’s lab at Baylor, and Miriam Huntley, a Ph.D. student in the Harvard School of Engineering and Applied Sciences working with Aiden, led the production. 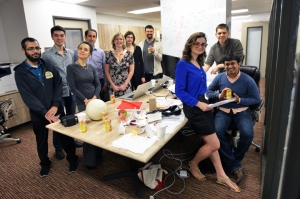 Tasked with explaining to a broader audience how the genome is folded up inside the nucleus of a cell, the group went with an origami metaphor to best illustrate how genome folding drives function.

The journal Cell only selects one, high-profile study each issue to highlight with an accompanying video so the request is often considered an honor by scientists who have published in the journal.

Using a tedious film technique called stop motion, the group spent over 300 hours trying to perfect the video, which required them to shoot thousands of individual frames of the origami.

“I’m not sure we totally knew what we were getting ourselves into when we started making the video,” said Rao, co-first author of the paper together with Huntley. “But we had a blast making it and we’re thrilled with the positive responses we’ve gotten. We hope our video encourages more scientists to explore creative ways of sharing their work with the public!”

In January, Rao was also recognized at Baylor’s Department of Molecular and Human Genetics annual retreat for the best paper.