The School of Health Professions at Baylor College of Medicine held a commencement ceremony for students in three of its programs this December: the Doctor of Nursing Practice Program, the Orthotics and Prosthetics program and the Physician Assistant Program.

Dr. Alicia Monroe, provost and senior vice president of academic and faculty affairs, conferred the degrees and encouraged the students to thank their friends and family who supported them through their training. She also reminded the students that they will always be members of the Baylor family and to carry Baylor’s values with them as they take the next steps in their journey. 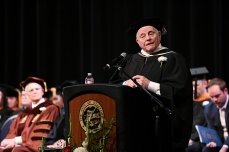 The commencement address was given by a familiar face to most of the students and faculty – Carl Fasser, who served as the founding director of the Physician Assistant program until July 2018. Fasser was instrumental in bringing a community-oriented primary care focus to the Program’s curriculum.

He has been recognized for his contributions to the field through many awards, including the American Academy of Physician Assistants Founder’s Award, Physician Assistant Education Association Master Faculty Award, Baylor’s Fulbright & Jaworski Faculty Excellence Award for Educational Leadership, Barbara and Corbin J. Robertson Presidential Award for Excellence in Education, the Alumni Association Distinguished Faculty Award, and the J David Holcomb Award for Sustained Leadership in Allied Health Education. He also was inducted into the Duke PA Program Hall of Fame as a distinguished alumnus.

The graduating class included 16 students from the Doctor of Nursing Practice Program, 24 students in the Orthotics and Prosthetics Program and 39 students in the Physician Assistant Program. Five student awards also were announced at the ceremony: