For over a decade, Baylor College of Medicine’s space-health institute has sponsored the Reach for the Stars STEM Festival at Rice University. The annual event aims to encourage middle school girls to take an interest in the sciences and provide them with a deeper understanding of the fields.

The College had another opportunity this year to educate students on essential topics in the sciences and discuss what it means to be a woman in medicine today. Reach for the Stars took place Oct. 12 on the Rice campus and featured a Mars surface activity coordinated by the Translational Research Institute for Space Health at Baylor College of Medicine and a workshop led by speakers from Baylor’s Center for Space Medicine.

“TRISH is really interested in making sure we are training up the next generation of young scientists,” said Rachael Dempsey, the communications and education officer at TRISH. “In light of NASA’s Artemis mission, by 2024 we are looking at returning to the moon and putting the first female onto the moon’s surface. This is the right time to make sure girls are especially inspired to get into STEM and help join that mission to return to the moon.”

Learning about minerals found on Mars. 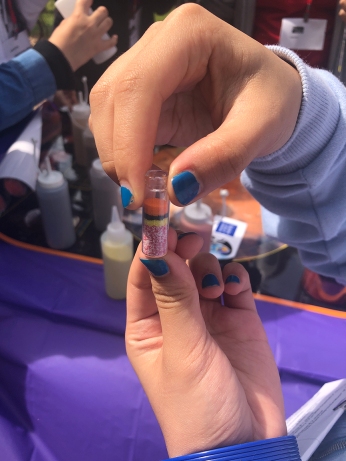 Baylor volunteers on the Rice campus.

During the Mars surface activity, TRISH staff showed students samples of minerals that are found on Mars and led them in creating their own sand bottles to represent the Mars surface. “This is all driving toward the day we can put the first human boot prints on the Mars surface,” Dempsey said.

Baylor faculty also had the chance to act as role models to young girls who are interested in becoming future physicians or scientists. Dr. Laila Woc-Colburn, associate professor of infectious diseases, director of medical education at the National School of Tropical Medicine at Baylor College of Medicine and chair of the Faculty Senate, led a panel discussion on women in medicine. The panel was formed by other faculty senators who shared their journey through medical school and daily routines as physicians.

“It’s very rewarding because it’s a way to show them that they can do it, too,” Woc-Colburn said. “We were able to discuss our different backgrounds and how we got here, which shows them that there are powerful role models that can help them and they can look up to.”

Along with Baylor physicians and Faculty Senators Dr. Tamara Ortiz Perez and Dr. Connie Tran, Woc-Colburn followed the discussion with an activity that teaches students how to use a cantaloupe as a model for epidural placement, an established simulation training technique. Also participating in the STEM workshop was Dr. Karlyn Powell, assistant professor of anesthesiology.

Woc-Colburn adds that it is not only essential to encourage young women to join the STEM field but also underrepresented minorities.

“One of the biggest issues that we have is underrepresented minorities in medicine,” Woc-Colburn said. “Our classes of women are climbing higher, but we still lag behind in African-Americans, Latinos and Native Americans.”

Also known as the Sally Ride Science Festival, Reach for the Stars has been hosted by Rice University since 2006 and features inspiring discussions from leading women in science and interactive STEM workshops and activities.

“It’s important to engage girls from an early age,” Woc-Colburn said. “You want to build girls in the STEM field by making them feel like they can participate. Sometimes if you don’t see someone like yourself, you might think that you are not able to do it, so I think having a festival like this that says ‘Yes, you can do this’ is great.”