Nearly 50 years ago a young scientist walked into Baylor College of Medicine, taking the helm of the Verna and Marrs McLean Department of Biochemistry as chair. Now Dr. Salih Wakil, who was a Distinguished Service Professor, is being remembered for growing the department into one of the country’s top research programs, fostering new science and supporting future doctors and scientists.

Wakil died on July 11 at age 91. He held the title of chair for 35 years. During that time, he continued his work on the mechanisms of fatty acid synthesis. His research changed the way other scientists understood this process, and later he discovered the enzymes critical to metabolic pathways that govern the body’s ability to burn fat. This discovery was made along with Dr. Lutfi Abu-Elheiga, professor of biochemistry and molecular biology at Baylor. Both founded FHG Biotech, a company developing therapies for the prevention and treatments of metabolic diseases and cancers. 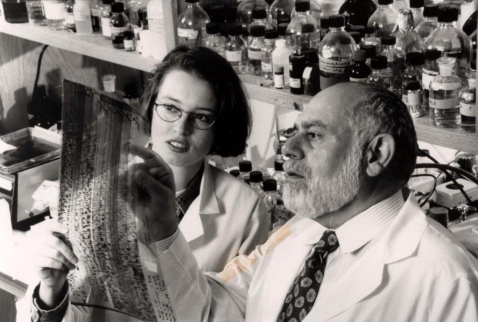 Salih Wakil in the lab at different points in his career, above and right.

With Dr. Paul Klotman and the late Dr. Bill Butler, and with Dr. Adam Kuspa at right. 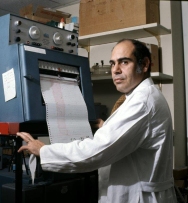 His career in research spanned more than 60 years, including many other scientific findings related to the fatty acid metabolism, which have had implications for the development of treatments for common disorders and disease such as obesity, type 2 diabetes, heart disease and various forms of cancer.

Wakil’s lab, which bears his name, currently is working on anti-obesity intervention based on a discovery by him and another of his colleagues, Dr. Motonari Uesugi, now a professor at Kyoto University in Japan.

His interest in science began while he was in high school in Karbala, Iraq, where he was born, after reading “On Origin of Species” by Charles Darwin. Wakil was able to attend the American University of Beirut on scholarship where he completed his undergraduate degree in chemistry. He then attended the University of Washington in Seattle, earning a Ph.D. in biochemistry. He became a research associate at the Institute for Enzyme Research at the University of Wisconsin at Madison where his research into fatty acid metabolism began. He worked as a professor at Duke University in North Carolina in the 1960s, and it was in 1971 when Dr. Michael E. DeBakey recruited him to become the chairman of the Verna and Marrs McLean Department of Biochemistry at Baylor.

Not only did he bring his scientific work and leadership to Baylor, he also began the distinguished Verna and Marrs McLean Annual Lecture Series, which continues today. He has an endowed chair in his name for the department, held by Dr. Adam Kuspa, senior vice president and dean of research at Baylor.

“Dr. Wakil was an extraordinary scientist, his legacy is not only in scientific discoveries, but in those he influenced and trained. Many scientists, and I am one of them, were greatly influenced by him,” Kuspa said. “All of us at Baylor College of Medicine are indebted to Dr. Wakil for his service and his friendship.”

His accomplishments and awards are countless, including his election to the National Academy of Sciences, the American Association for the Advancement of Sciences, Bristol Meyers Squib Metabolic Research Award, the Paul Lewis Award in Enzyme Chemistry (the Pfizer Award), the Distinguished Duke Alumnus Award, the Chilton Award from University of Texas Southwestern Medical Center, the Kuwait Prize, election to fellowship in the American Academy of Microbiology, the Supelco/American Oil Chemists’ Society Research Award, the Yamanouchi USA Foundation Award, and his personal favorite, Admiral in the State of Texas Navy.

While Wakil’s academic and scientific accomplishments are many, he was also proud of his family, who he spoke of with great joy. He is survived by his wife of 66 years, their four children, who all earned medical degrees, seven grandchildren, as well as many extended family and friends that he held dear.

Wakil stepped down a chair in 2006 but was still a fixture at Baylor, continuing his work and mentorship until his death.

Dr. Salih Wakil and his family at the time of their move to Houston.

On the Euphrates river.