Baylor College of Medicine and the Texas Medical Center are home to the largest collection of medical science minds in the world, but not all of those minds are born in Houston, or even the United States.

The International Services Office team, part of the Office of Human Resources, works behind the scenes to facilitate the processes that make it possible for non-U.S. citizens to train and work here.

As Joy Dun, ISO team leader explains, the office serves all international visitors who come to the College, including international students, scholars and faculty members as well as occasional observers. 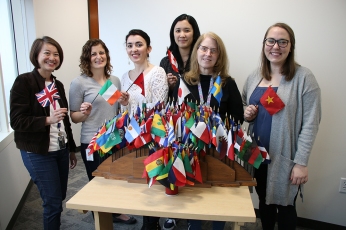 Flags of the world!

“For example, Match Day is about to happen, so we collaborate closely with the Graduate Medical Education Office to make sure that the doctors that they want to match with have the proper authorization to be able to complete their program.”

According to Dun, the ISO office currently assists around 2,000 people. This number includes any non-U.S. citizen in the Baylor system.

The most common countries from which Baylor’s international community members come from are China and India. Baylor also receives many visitors from Africa, which Dun attributes to Baylor’s global programs like the Baylor International Pediatric AIDS Initiative at Texas Children’s Hospital.

Scholars also have come to Baylor from some other, more exotic locales. Kira Geslin, immigration advisor, said that she is currently working with community members from Azerbaijan as well as Burkina Faso, a landlocked country in West Africa.

The six team members that make up the International Services Office themselves have connections with countries outside the U.S., with most of them having lived in a foreign country for some period of time. Immigration advisor Amy Makiyama said that at last count, the number of countries visited by the team collectively reached 56. They said that knowing what it’s like to try to navigate a foreign country helps them relate to the visitors they work with.

Depending on where life leads them, some visitors stay in the United States longer than they originally planned.

“If they meet someone and get married here, they’ll stay. If they have children, they tend to stay,” Dun said. “There are some people who go back home, and sometimes they set up their labs overseas and continue collaborating with their lab here.”

To the ISO team, the best part of their job is seeing the journey that trainees, scholars and visitors take once they’ve helped them get here.

“Some of them stay for a very long time, so we see them from coming in for the first time and getting oriented all the way to when they become a green card holder or citizen,” Dun said. “It’s kind of fun – when they get their green card, they contact us and we rejoice with them!”

Despite the seemingly endless stacks of paperwork and record-keeping, the ISO team realizes that what they do has a huge impact on people’s lives, including the visitors they work with and the broader global community.

“The more diverse minds that are working on solving a problem, the sooner they will get it solved and move it to the next level. And in order to do that you’ve got to have people from diverse backgrounds and countries,” Makiyama said. “You’ve got to have an office that can quietly, seamlessly facilitate the immigration process so that those people can come in and do what they need to do.”