In February, the nation commemorates Black History Month, and at Baylor College of Medicine that means a focus on key figures and milestones in medicine and research.

Baylor trainees have compiled information on some of the important African-Americans in medicine and science whose contributions and impact have paved the way for the healthcare professionals and scientists of today and tomorrow. Read more below about these groundbreakers. 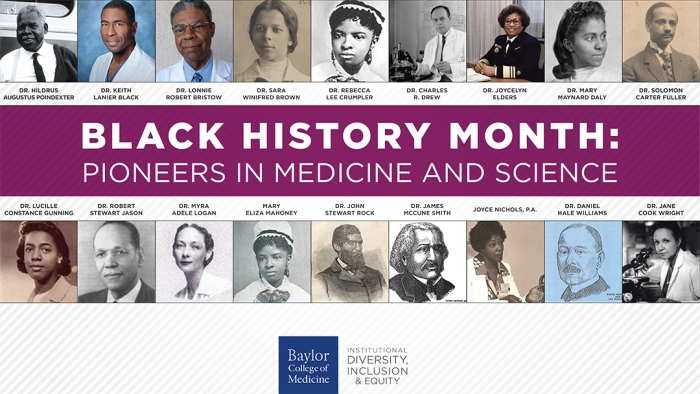 She obtained her bachelor’s and medical degree from the University of Michigan and completed her neurosurgery residency at the University of Minnesota. This established her as the first black neurosurgeon in the United States. Eventually, Dr. Canady was inducted into the Michigan Women’s Hall of Fame and later received the American Medical Women’s Association President’s Award.

She was the first black American woman in the United States to earn a Ph.D. in chemistry, awarded by Columbia University in 1947. Dr. Daly made important contributions in four areas of research: the chemistry of histones, protein synthesis, the relationships between cholesterol and hypertension and creatine’s uptake by muscle cells.

The first woman to be formally educated as a PA, Ms. Nichols was also the first black American woman to practice as a PA. She was a student when the American Association of Physician’s Assistants (today known as the American Academy of Physician Assistants, or AAPA) was established in 1968. As the first minority to serve on the AAPA Board of Directors, she advocated and took responsibility for establishing the AAPA Minority Affairs Committee, which she chaired.

As a little girl, Dr. Hughes Gaston was inspired to become a physician after she witnessed her mother face health disparity because of her ethnicity and socioeconomic status. At her matriculation into medical school, she was the only black American woman. In 1986, she published a paper proving that long-term use of Penicillin can prevent septic infections in children. The results of this publication and its implications ultimately led to nationwide screening for sickle cell anemia in newborns. In 1990, she became the first black American woman to direct a Public Health Service.

Dr. Brangman physically operated the breathing bag that kept Dr. Martin Luther King Jr. alive during an emergency heart surgery at Harlem Hospital after he was stabbed during an assassination attempt in 1958. After this momentous day, Brangman went on to have an illustrious career, which included serving as the CRNA American Association of Nurse Anesthetists President from 1973-74.

Dr. Amos was the first black American to qualify as a microbiologist. He earned his Ph.D. from Harvard Medical School and continued on as a faculty member there. After retiring from Harvard he joined the Minority Medical Faculty Development Program sponsored by the Robert Wood Johnson Foundation as its first national director. This program was renamed to Harold Amos Medical Faculty Development Program in 2004.

Dr. Williams graduated from Chicago Medical College in 1883. In 1891, he founded the nation’s first interracial hospital, Provident, in response to the lack of opportunity for blacks in the medical professions. Provident later became the first school for black nurses in the United States. Additionally, it was at Provident where Williams performed the first successful open heart surgery on July 10, 1893. The patient lived for over 20 years following the surgery. Williams later became the only black charter member of the American College of Surgeons in 1913.

Dr. Poindexter was a bacteriologist who studied the epidemiology of tropical diseases.  He was the first African American to earn both an M.D. and Ph.D. The son of tenant farmers, he earned is M.D. from Harvard Medical School, his Ph.D in microbiology and immunology from Columbia University, and an M.P.H. in public health and tropical medicine from Harvard University.

Mr. Benson is a founding member and was the first president of the International African American Prosthetic and Orthotic Coalition. The Coalition was established in 1990 to promote the O & P profession in the African American Community.

Baylor’s Association for Graduate School Diversity also has organized a film series centered on African-Americans in medicine. To be shown on Fridays throughout February, the films include “Hidden Figures,” “Miss Evers’ Boys” and “The Immortal Life of Henrietta Lacks.” See the full schedule and descriptions of the films on the Institutional Diversity, Inclusion and Equity website, along with other activities planned on campus for Black History Month.