Holocaust survivors and twin brothers Dr. Bernard Schanzer and Mr. Henry Schanzer spoke to a standing room only auditorium about their experience in Nazi-occupied France during World War II, where they survived through their mother’s resourcefulness and the help of others who put their own lives at risk. 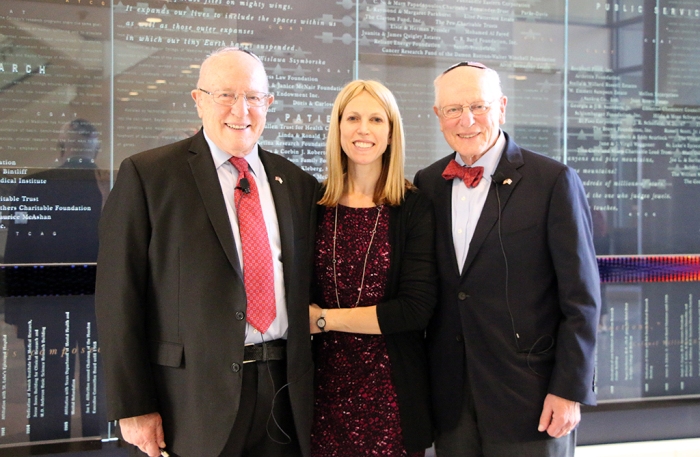 Dr. Bella Schanzer with her father and uncle, Bernard and Henry Schanzer.

Bernard and Henry are the father and uncle of Dr. Bella Schanzer, associate professor and vice chair for clinical affairs in the Menninger Department of Psychiatry and Behavioral Sciences.

The brothers’ talk was part of Psychiatry Grand Rounds, but Bella Schanzer decided it was appropriate to open the event to the College at large, especially coming shortly after the mass shooting at the Tree of Life synagogue in Pittsburgh. Their talk was held last month on the main Baylor campus.

At times somber and at others humorous, the brothers took turns telling their story and sharing pictures of their lives before, during and after the Holocaust. They were only 7 years old when they were impacted by the Shoah, or Holocaust, perpetrated by the Nazis whose intent was to kill every Jew, irrespective of age, gender, religious affiliation or status.

“I want to thank you for asking us to share our story with you. We’ve told our story to our children, and we’ve told it to our grandchildren. Today, with your permission, we would like to make you part of our family and share our story again with you,” Bernard began. “Our story is one of terror and survival told from a child’s point of view.”

Their mother, also named Bella, was born in Poland and their father, Bruno, was born in Czechoslovakia. Both of their families immigrated to Belgium in the early 1930s where Bella and Bruno met and were married in 1932. The twins’ sister, Anna, was born in 1934, and they were born in 1935.

On May 10, 1940, the Germans invaded Belgium. Within a few days, 15 members of Bernard and Henry’s extended family, including their ailing grandmother and Anna, who had just had her appendix removed, fled ahead of the advance of the Germans toward France. As they were fleeing, their first experience with the horrors of war occurred as they tried to cross the French border.

“German planes began to attack our van and the town we were approaching. Those of us who were able to do so jumped out of the van and took cover on the side of the road. As the planes flew by we saw cars, buildings and people being blow into the air,” Henry said.

After the bombing, they continued traveling from town to town in the south of France and finally settled in the city of St. Etienne in the summer of 1940. For a time, the family lived without incident and even took a vacation to the French countryside in the summer of 1941. However, any degree of normalcy came to an abrupt end in summer 1942.

St. Etienne, in Vichy, France, was not under the immediate control of the Germans; however, the French government and police participated actively, willingly and intensely in the arrest and deportation of Jews. In mid-July 1942, the twins’ parents had sent them to a summer camp, but when they returned home from camp in early August, they found the atmosphere was tense. Stories had begun circulating about German atrocities, although their father, who had been educated in Germany, did not believe the Germans could behave in the manner being reported. Their mother, on the other hand, had been subjected to virulent anti-Semitism from an early age growing up in Poland and feared the worst. Unfortunately, their parents and their extended family opted to stay in St. Etienne. Then in mid-August 1942, their parents made the decision to send the boys to board with a Christian acquaintance of their father’s while their sister would be boarded in a school in Lyon.

“Our father took us to the bus depot; he was carrying our suitcases and it was a hot summer day,” Bernard said. “When we got to the bus depot, our father reminded us that we had to behave like big boys and be on our best behavior. Then while waiting for the bus he took Henry and me, each one on a knee and he held us. Suddenly something happened and everything started shaking, we were shaking and then we realized that our father was sobbing. As the bus came, he quickly composed himself and helped us get on. That is our last recollection of our father. We never saw him again, and he never saw us again.”

A few days after arriving at the home of their father’s acquaintance, their mother Bella came to visit. At the end of the visit, they went with her to the bus depot where a French policeman was going from person to person asking for their identity card. When he came to their mother, he looked on a notebook and said she was wanted by the police in St. Etienne. After an exchange of money with the officer, he let her get on the bus rather than detaining her. When she arrived back in St. Etienne she found out their apartment had been seized.

On that day she realized that Bruno and several other family members also had been arrested by the Nazis. Bruno was sent to a French detention camp and ultimately died in Auschwitz.

Because of the heightened danger of hiding Jewish children, their father’s acquaintance decided to take the boys to the police in St. Etienne who then placed them in a Catholic orphanage. Meanwhile, Bella had managed to obtain false identification papers with the help of Madame Jeanne Bonhomme, a dressmaker who knew her. Bonhomme also aided her in acquiring a job working in a castle owned by Count Xavier and Countess Marie-Francoise de Virieu who were part of the French Resistance. Bella managed to have Anna taken in at the castle as well.

After moving around several times, Bonhomme arranged for the twins to be taken in by her mother, Adolphine Dorel, on her farm in St. Pal de Mons. The twins formed a strong and affectionate bond with Dorel whom they called La Meme.

Bernard shared a story of how he and Henry would cover their heads and quietly say a Hebrew prayer called the Shema. After a few weeks, La Meme heard them mumbling and asked what they were doing. They explained the significance of the prayer to her and she asked them to teach it to her so they could say it together.

“She was our friend and our protector. We came to love La Meme,” Bernard said.

The boys continued to live with La Meme until the end of the war when they were reunited with their mother and sister. They also found their cousin Jack whose parents had died in the Holocaust. In 1946, the family came to the United States and settled on the lower east side of New York City in a tenement.

“Our mother at that time was 45 and a widow. She had to care for four children, and she had to work hard. She had to feed us, clothe us and pay the rent. She worked hard and imbued in us that you have to get an education and that we have to look forward,” Bernard said.

Although they faced hardships in the United States, Henry went on to become a lawyer and Bernard became a doctor. In 1980, Anna successfully petitioned Yad Vashem to recognize Bonhomme and Dorel as being named Righteous Among the Nations, a designation for non-Jews who risked their lives to help Jews escape extermination. An article covering the ceremony to honor Bonhomme and Dorel as Righteous Among the Nations appeared in the Jewish Floridian newspaper that 86-year-old Siegfried Gutter happened to read. Gutter had survived the Holocaust and believed he was the only one of his family to have survived. However, when he read the brothers’ story, he had a feeling that they were the grandchildren of his late sister Charlotte Schanzer and, incredibly, he was correct.

“The spirit of all of our ancestors who were murdered lives on, and our family and our people have risen from the ashes. We thank God that we have children, grandchildren and great grandchildren. The attempt by the Nazis and their cohorts to destroy the Jewish people has not succeeded although they have inflicted great harm,” Henry said. “We also must bear in mind that 7 million people were massacred by the Nazis, and, all told, it is estimated that between 50 and 80 million were killed in World War II.”

The brothers concluded their story by encouraging everyone in the audience to have the courage to face evil and bigotry and to recognize that each one of us, with all of our diversities, is important. They share their story so that people can retell it and take responsibility for making sure another Holocaust never happens again. 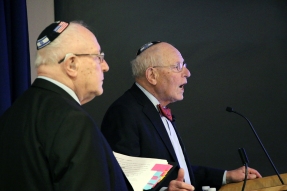 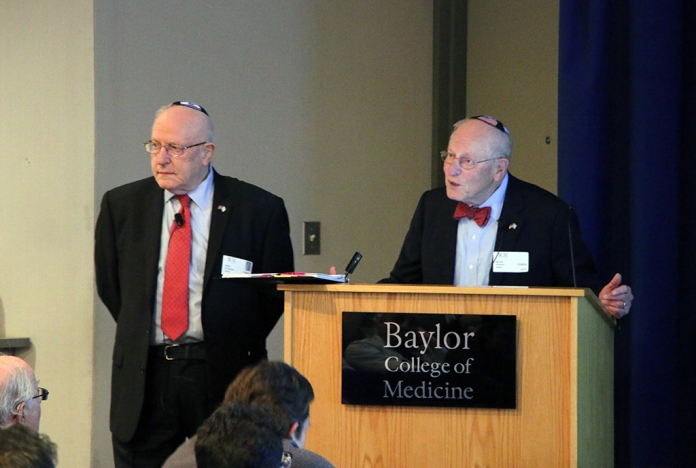