During the height of Hurricane Harvey and in the days that followed, thousands of evacuees gathered at the George R. Brown Convention Center and NRG Center seeking shelter. Helping to provide crucial counseling and psychiatric care to evacuees at these shelters were Baylor College of Medicine psychiatrists, including Dr. Asim Shah. 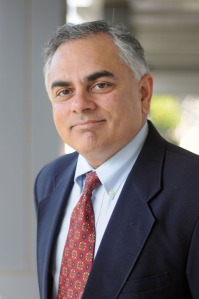 “I helped organize the psychiatric teams at both the GRB and NRG, but I remained on-site at NRG throughout the time we provided coverage,” said Shah, professor and executive vice chair in the Menninger Department of Psychiatry and Behavioral Sciences at Baylor. “It was a challenge to organize coverage during the first few days because of the flooding that prevented people from being able to come and go. In addition, we were still responsible for providing psychiatric care for patients at Ben Taub Hospital.”

He explained that initially they planned to only have two psychiatrists at both the GRB and NRG, but this expanded to four and then at one point there were 10 psychiatrists, along with residents, assisting people at both shelters.

The team never hesitated to help, no matter what challenges they faced, Shah said.

“We all wanted to help because that’s what we want to do as doctors. We should be helping people whenever there is a need because if we don’t help, who will? Even before the crisis began, I sent emails to city officials letting them know that we were ready to assist if needed,” Shah said.

Having had previous experience providing psychiatric care to victims of hurricanes including Katrina, Rita, and Ike, Shah said he knew the impacts of these storms could be devastating and that is why he felt like it was important to reach out to city officials early on.

Helping people during this crisis has been one the most rewarding experiences he has had in a long time and seeing the outpouring of support from the public for those in need has been heartwarming, Shah said.

“It’s so great to see that so many people, including doctors and other citizens of our community, are volunteering to help people impacted by Harvey. For me, this has really been one of those times that I have felt I’m working to fulfill the Hippocratic Oath,” he said. “And as devastating as this experience has been, I believe our city and its people will be more connected and stronger than before.”