Dr. Janet Butel’s contributions to Baylor College of Medicine and the field of virology as a researcher and mentor are significant, so it’s fitting that her retirement as chair of the Department of Molecular Virology and Microbiology was celebrated not just at the College but beyond. 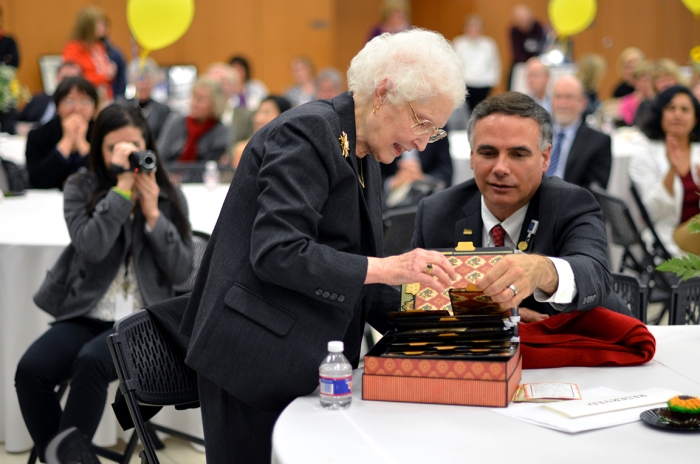 A symposium in her honor was held Friday, Jan. 6, in Cullen Auditorium and Rayzor Lounge with a full day of scientific lectures and remembrances about Butel’s career achievements. The day also was declared Dr. Janet Butel Day by Houston Mayor Sylvester Turner.

Dr. Paul Klotman, president, CEO and executive dean at Baylor, highlighted Butel’s career as he presented the city proclamation in her honor.

Butel was the first woman to have ever been awarded a Baylor endowed professorship, the first woman to chair an academic unit at Baylor and the first woman designated to be a Distinguished Service Professor. She has served as department chair for 28 years, and was the founding director of the Baylor College of Medicine-UT Houston Center for AIDS Research, which she has led for more than 20 years.

Her work has focused on the biology and molecular biology of the polyomaviruses, with a primary focus on polyomavirus SV40. Originally isolated from monkeys, SV40 is a small DNA virus that is able to transform cells in culture and induce tumors in hamsters. As a model tumor virus, SV40 has provided many fundamental insights into the molecular basis of carcinogenesis.

As a longtime department chair at Baylor, Butel will be remembered not only for her scientific contributions but as a leader and mentor. Dr. Thomas Wheeler, chair of the Department of Pathology & Immunology, spoke about this.

“Janet embodies the signs posted around our campus extolling our values of Respect, Integrity, Innovation and Teamwork,” Wheeler said. “I first got to know her very well in 2004 when I became interim chair of the pathology department at Baylor. She became a confidant to me, and I knew I could turn to her when needed. She’s been a great mentor to me from the standpoint of serving in a leadership role at the College.”

Symposium speakers represented Baylor and other institutions speaking on research topics including antiviral vaccine development, HPV, hepatitis and more. The symposium was followed by a reception for Butel in Rayzor Lounge, where she was toasted and presented with a commemorative chair. Throughout the day, many colleagues offered personal reflections, including Wheeler, Dr. Wah Chiu, Dr. Mary Estes, Dr. Richard Gibbs, Dr. Peter Hotez, Dr. Huda Zoghbi, Dr. Marth Mims, Dr. Gayle Slaughter, Dr. Joe Petrosino, Dr. Ellen Friedman, and others, and more reflections were included in a scrapbook specially made for Butel.