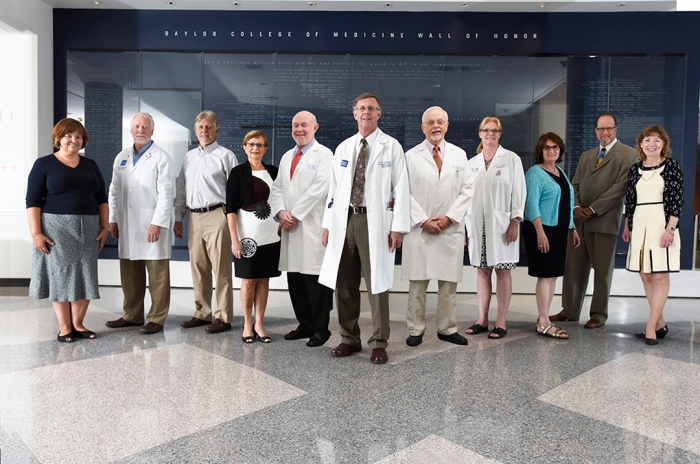 After more than a decade of hard work, immeasurable hours of effort and the submission of three progressively larger core grant applications with the latest submission numbering almost 1,900 pages), the Dan L. Duncan Cancer Center can celebrate a significant milestone’s in its history.

Last month, the Center was awarded the National Cancer Institute’s Comprehensive Status – the highest designation a cancer center can receive. Read more about it in the Baylor press release.

Internally, preparation for this designation began more than 10 years ago, said Ted Yank, administrator of the Duncan Cancer Center since 2004.

“In the mid-90s, a group of consultants were brought in to advise Baylor on what additional elements would be needed to achieve NCI designation. There were already strong pediatric and prostate cancer programs at Baylor along with strong basic research, but the need to strengthen and broaden more adult cancer groups was identified,” Yank said.

What followed was a string of high profile recruits. In 1998, Drs. Malcolm Brenner, Helen Heslop and their team, renowned cell and gene therapy experts from St. Jude’s Cancer Research Hospital, were brought on to establish a new program at Baylor. In 1999, an entire group of breast oncologists and researchers, led by Dr. Kent Osborne, was recruited from the University of Texas Health Science Center in San Antonio.

In 2003, the Center submitted and received one of the last NCI Center planning grants – providing two years of support to help develop a more robust center.

“By 2004, the wheels were in motion to put the infrastructure together to go for NCI designation,” said Yank of the year he was recruited to serve as administrator of the Center. “While we had many cancer investigators in our membership, we had only a few actual employees in the Center, including Shari Yepez who has been with the Center from its very beginning. On top of that, we went through the split with Methodist, which required a change in leadership with Dr. Osborne being appointed as acting director soon after the split.”

Over the next two years, the team worked hard to strengthen programs and build infrastructure; for example, creating a clinical trials office to support clinical investigation and a Protocol Review and Monitoring Committee to provide scientific oversight over all clinical research in the Center and its affiliates. “This is an absolute requirement for NCI designation and you have to have a track record,” Yank said.

In 2006, the Center received a magnificent gift – $100 million from late oilman and philanthropist Dan Duncan, which gave the Center its name, but more importantly provided the financial stability and resources to propel the Center toward ultimate success. Coincidentally, Yank recalls the day, Feb. 1, 2006, when the $100 million gift was publically announced, the new name was unveiled and the Center mailed its first core grant application (seven copies at 963 pages each) to the NCI.

After a rigorous review process including a site visit, it was announced a year later, in 2007, that the Center would become an NCI-designated center, a prestigious distinction that separated it from many other centers in the city, state and nation.

“We were also fortunate in 2007 to have the State of Texas create the Cancer Prevention and Research Institute of Texas,” said Yank, of the organization that began issuing cancer grants to state institutions in 2010. Baylor has received more than $155 million in cancer prevention and research funding since then. “It was a huge shot in the arm for us and allowed Baylor to recruit some real stars.”

The team and membership only got stronger from there, sending a competitive renewal in late 2009 and receiving renewal as an NCI-designated center in 2010.

Following the 2010 renewal, Osborne and his team of associate directors, program leaders, shared resource directors and staff, set their sights on the ultimate goal – comprehensive status, the highest and most prestigious designation achievable by the NCI.

“This means you are a super cancer center,” said Osborne. “We’ve always been looking toward this goal.”

Comprehensive status designation is reserved for cancer programs that demonstrate significant depth and breadth in basic, clinical and translational research, research into cancers most affecting their local communities, clinical care, outreach and education activities, as well as effective cancer epidemiology and prevention programs.

The team filled out the Center, consistent with its strategic plan, with many recruits. Key additions included Dr. Melissa Bondy as associate director for Cancer Prevention and Population Science, Dr. Steven Curley, an expert in liver and pancreas cancer as associate director for clinical affairs, and Dr. Matthew Ellis, an expert in breast cancer as associate director for translational research. Clinical programs were broadened with recruitments including Dr. David Sugarbaker, a world expert in lung cancer and mesothelioma, Dr. Andrew Sikora, an expert in head and neck cancer, multiple recruitments to grow and strengthen hematology-oncology under Dr. Martha Mims’ leadership and the creation of a Department of Radiation Oncology lead by Mark Bonnen. These were all necessary elements of a Comprehensive Cancer Center.

In January 2014, the team started buckling down to writing what ultimately was an 1,883 page grant submission. After nine months of review and multiple revisions, it was transmitted electronically to the NCI in September. Over the next four months the team prepared and practiced for the in-depth, one-day site visit by 25 of their peers brought to Houston by the NCI. On Feb. 24, 2015, Osborne, key College leaders and Center program leaders put their best foot forward for the assembled reviewers.

Then they waited through the spring and summer for the official word from the NCI. On the last day of July 2015 Baylor received the official confirmation of comprehensive status.

The cancer-relevant research portfolio documented in the core grant exceeds $152 million, and the Center now has 191 research members, 60 clinical members, 199 associate members and employs about 85 staff and faculty. It joins an elite class of comprehensive centers – only 45 in the United States, including Baylor’s neighbor in Houston, MD Anderson Cancer Center.

“I am so proud of everyone on our team,” said Osborne. “This was truly an institutional and group effort, and this wouldn’t have been possible without the support of our donors, the College, our clinical affiliates and each and every one of our members and staff.”