Ian Campbell has known since a young age that he wanted to be a doctor and became interested in research as an undergraduate student. Now, as an M.D./Ph.D. student at Baylor, he’s merging those interests – with a lot of success.

“Pursuing an M.D./Ph.D. is the perfect union of a life-long aspiration and a new adventure,” said Campbell, a native of Knoxville, Tenn., and graduate of the University of Tennessee with a degree in biology.

As a first-year medical student here, Campbell was introduced to clinical genetics by Dr. Loraine Potocki. “Her enthusiasm for genetics helped kindle an appreciation for the field. This appreciation, together with world-renowned faculty and ample funding, lead me to join the genetics department for my Ph.D.”

Early on in graduate school, he rotated in the labs of Drs. Pawel Stankiewicz and James Lupski, who would go on to become his thesis mentors, and around the same time was involved with a patient who triggered his interest in mosaicism, the focus of his thesis.

Recently, Campbell was an investigator on research related to mosaicism that was published in The American Journal of Human Genetics. Researchers collected DNA from 100 families from around the word with a child with a DNA deletion associated with a variety of genetic diseases. They used a sensitive test to check peripheral blood DNA from both parents and found that in four families, the same extremely rare deletion found in all cells in the child was also present in a small fraction of cells in the parents. This means that the parents are mosaic for the mutation and subsequently passed the mutation to their children.

“These surprising results change the way we think about the origin of new mutations, or mutations that are apparently present in an individual but not in his or her parents,” Campbell said.

The research was featured by scientific and news media, Campbell noted. “Interacting with the journalists to explain the results of our work to non-experts was a fun and enlightening experience. This side of science is something that many students do not get to learn about, and thus I consider myself very lucky.” Read more about the research in the Baylor press release. 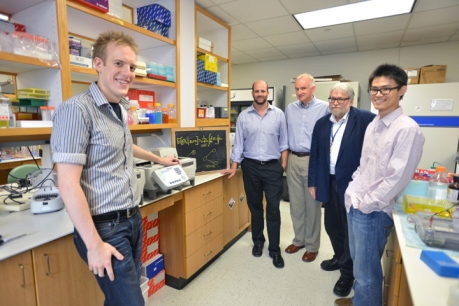 He also presented the research at the 2014 meeting of the American Society of Human Genetics in San Diego, where he received the Charles J. Epstein Trainee Award for Excellence in Human Genetics Research. He also received the Deborah K. Martin Award for Outstanding Achievement in Biomedical Sciences from the graduate school.

While the research is fulfilling, Campbell also knows first-hand that it can present certain frustrations, in particular perfecting a figure for the presentation of data, which is often done using PowerPoint.

“Seeing this combination of frustration and aversion time and again among my friends and colleagues led me to design a seminar series on Adobe Illustrator for Biomedical Scientists in my spare time. Thanks to some help from the BCM Blackboard administrator and the M.D./Ph.D. program, I was able to hold a three-part class open to all BCM students, postdoctoral associates, faculty and staff. More than 150 people attended at least one of the classes.”

In his free time, Campbell enjoys running and has participated in the student-organized Wellness 5K several times.