Every year, thousands of breast cancer clinicians, researchers and advocates descend upon San Antonio, Texas, to discuss the latest advances in the field. Now considered the largest and most prominent breast cancer meeting in the world, Baylor College of Medicine faculty have played a major role in the development, growth and success of the scientific meeting.

Dr. Kent Osborne, director of the NCI-designated Dan L. Duncan Cancer Center at Baylor, has been involved since the first meeting in 1978, held in a hotel in downtown San Antonio. Osborne was on faculty at The University of Texas Health Science Center at San Antonio at the time.

The first couple of meetings were small, attracted about 50 people, and were aimed at local doctors. 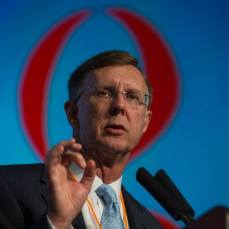 But Osborne and his colleagues were able to recruit real “stars” in the field to speak, he said. After the group decided to invite doctors to submit research abstracts for presentations at the meeting, it grew more every year and eventually grew out of the small hotel conference room and into the Henry B. Gonzalez Convention Center in San Antonio.

Osborne became co-chair of the meeting in 1992, and was recruited to lead the breast program at Baylor in 1999. Several of Osborne’s colleagues in San Antonio moved to Baylor with him and Baylor faculty became more involved in the meeting’s planning.

In 2005, Baylor became an official joint sponsor of the meeting. In 2007, the American Association for Cancer Research joined Baylor and the UTHSCA as a sponsor.

Today Baylor faculty members play a major role in the scientific programmatic planning of the meeting. Top clinicians and scientist from all over the world choose the Symposium as the forum for presenting their latest studies.

Dr. Gary Chamness, professor in the Lester and Sue Smith Breast Center at Baylor who moved over to Baylor from UTHSCA with Osborne, serves as program coordinator of the event.

Osborne, Chamness and Dr. Mothaffar Rimawi, medical director of the Smith Breast Center, all serve on the Symposium’s eight-person executive committee. Additionally, Baylor has 8 of 26 clinicians and scientists on the program planning committee and 26 of 80 on the abstract review committee.

During the Symposium, Baylor faculty members help moderate round table discussions and general, education and scientific sessions. Osborne concludes the meeting every year by leading the “Year in Review” discussion on major developments over the past year.