How did someone who spent the early years of his life working in the cotton fields and orchards of California during the Depression become a legend in the specialty of trauma care? You ask that of Dr. Ken Mattox and he’ll say, “By taking on the big, tough cases and figuring out how to make the patients better. That’s what drove me.”

Now, after a 60-year career at Baylor College of Medicine, starting as a medical student, Dr. Mattox has announced that he will step down as chief of staff of Harris Health’s Ben Taub Hospital once a successor is named. He has held this role for 31 years. Dr. Mattox will continue as Distinguished Service Professor in the Department of Surgery at Baylor and will play an important role in special projects for the College.

He was a junior studying pre-med at Wayland Baptist University in Plainview, Texas, when he made his first trip to Baylor College of Medicine. He had come to Baylor to present a couple of papers at the Texas Collegiate Academy of Science meeting that was convening on the campus, and the school immediately impressed him. Baylor’s affiliation back then with Baptist-based Baylor University also aligned with his religious upbringing, so he decided not to interview anywhere else. When he matriculated in 1960 as a recently married man, he was one of 84 students, four of whom were women. 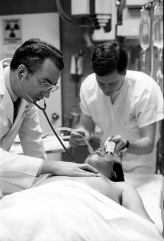 Dr. Mattox as a medical student.

“At the time, I was looking for things that were tough, and I was learning there was always room at the top if you worked hard. I heard about Baylor’s surgery department when I was down here and about Dr. DeBakey. He was known for his dominant personality, and he got things done, put the school on the map – and he worked people very hard. That appealed to me. I thought Baylor was probably the toughest school in Texas. So, I chose it because it had a good reputation and the Medical Center was growing.”

Dr. Mattox recalls that what drew medical students and residents to Baylor back then was Ben Taub Hospital and its missionary spirit of treating people in need but with few, if any, other options. This was an environment in which Dr. Mattox thrived, and over his career he built an incredible legacy as a trauma pioneer.

When asked why he continued to serve as chief of staff and chief of surgery at Ben Taub Hospital, he responded, “Why should I have left? I loved the clinical side, I loved to operate, I loved the big, bad cases, I loved to write and to deal with concepts and policies. And, forever driving me was the desire to find a better way. I was and continue to be able to accomplish that.”

Looking back, what began as an evening out with several like-minded young surgeons discussing how to develop a trauma service that improved the standards of patient care turned into the germination of a transformational idea. In the early 1970s, thoracic surgery was just emerging, but emergency medicine, trauma and emergency medical services did not exist.

“One night at the Roosevelt Hotel in New Orleans, about eight of us – all young surgeons and assistant professors and instructors – wrote out on the back of a napkin what ultimately became the nidus of the specialty of emergency medicine. We outlined plans for two journals, two organizations, standards and a time table.” And the rest is history.

Fast forward almost 50 years later, across a lifetime dedicated to his patients and to medical advancement. There is so much to be proud of. And, aside from editing the definitive text book on trauma, taking on the most difficult clinical cases and treating critically ill patients, Dr. Mattox says the most rewarding aspect of his legacy is “dotting the world with individuals we have trained to practice high quality medicine, particularly in surgery but in other areas as well.”

He believes in being a “force multiplier,” a term he uses on his Twitter account to describe himself. Perhaps this is why training those who train others is so deeply important to him – because this cycle becomes a force multiplier that exponentially spreads crucial knowledge and lifesaving skills. To make that kind of impact strikes at the core of who he is and what he values most.

Leading a group of alumni on a campus tour.

Speaking to a group of alumni in Cullen Auditorium.

He also has wielded his influence as an active participant in helping to formulate and pass legislation related to improving care for the trauma patient on local, state and national levels. He has served on city and community initiatives, including the Mayor’s Neighborhood-Oriented Government Steering Committee, the Red Ribbon Committee to address Houston Fire Department Emergency Medical Services and the Hospital Subcommittee of the Mayor’s Special Task Force on the Medical Aspects of Disaster.

His role in disaster response is one he is particularly proud of. During the Allison, Katrina and Rita storms, Dr. Mattox was at the center of the medical response. During the response to Hurricane Katrina that hit New Orleans, he assisted in the formation of an “Evacuation City” for more than 25,000 evacuees to Houston. He was part of the four-member medical branch and supervised the five-tiered medical care for more than 15,000 clinic visits in just 14 days.

“Dr. Mattox’s dedication to the College and to Ben Taub and beyond is unparalleled. He has mentored students, residents and faculty for decades,” said Dr. Paul Klotman, Baylor president, CEO and executive dean. “He is an amazing man, and I hope everyone will join me in thanking him for his years as chief of staff at Ben Taub Hospital.”

–A version of this story originally appeared in Baylor alumni publications.