Months ago, at the beginning of the COVID-19 pandemic, Baylor employee Asela Nieuwsma and her fiancé, BCM urology resident Alexander Liu, were faced with the news that their dream wedding wouldn’t go forward as planned. They decided to adapt to the situation and exchange vows in a scaled back ceremony.

Now, four months later, the two – like the rest of us – are making their way through the uncertainty of coronavirus, but thankful they are doing it hand in hand.

Asela, a pediatric cardiovascular research sonographer at Baylor and Texas Children’s Hospital, and Alexander met three years ago in Houston, right before Alexander started his residency here. Their wedding was set for March 25, shortly after the pandemic shut down sports leagues, the Houston rodeo and other activities, along with many businesses. Their wedding venue was among those closed due to the pandemic. 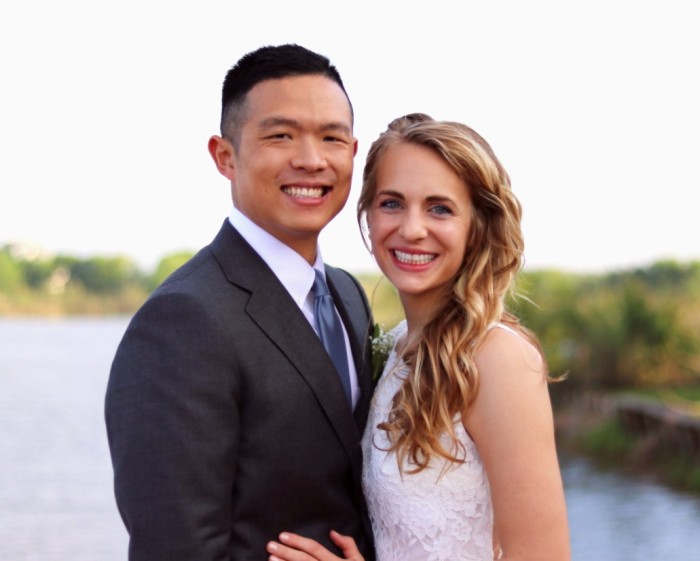 “While we did get a new date in late August from our venue, who knows if this will actually be allowed at that time, or if some of our guests will be willing or able to travel. However, we are grateful that we were able to have our minister marry us on his land with some family and friends watching via video conference,” Asela said.

After the ceremony, it was back to work, although that looked quite different than it did before COVID-19.

Alex was on a minimally invasive surgery rotation before coronavirus, and subsequently transitioned to direct inpatient care, emergency case coverage, and online didactics due to concerns for team safety and the halt of elective surgeries. Asela’s job in pediatric cardiology research transitioned to work –from-home, which she described as a smooth transition.

“Although we do miss our former roles, we both have amazing teams and think that BCM has been very accommodating to the needs of its employees and the community. We are also encouraged by the innovation our community has shown in its efforts to proceed in a safe manner,” Asela said.

While the pandemic has been challenging on so many fronts, Asela and Alex have been able to find the silver lining.

“A crisis really leaves little room for pretense, and Alex and I have learned that we are truly made for each other. We also feel very blessed with everything that we have and the privilege to do what we do,” Asela said. “Seeing the way we, as a people, have responded to such a challenge has also highlighted the importance of altruism and an open mind, especially with the variety of suffering this tragedy has caused. And while we are just one of many people affected by this, our problems still pale in comparison to those struggling medically or financially.

“We hope that our story can encourage people to love their neighbors, because ultimately, that is what will save our beloved country,” she said.

They’re hopeful, but not necessarily optimistic, that their rescheduled wedding can occur in August. At the very least, the couple hopes to celebrate with their extended circle.

“We are so grateful for our Houston community/family, and would love to, at the very least, have a party with them at some point and make the most of the situation!” Asela said.