Baylor College of Medicine’s 2019 Commencement was held Tuesday, May 28, at Jesse H. Jones Hall for the Performing Arts in downtown Houston, marking the graduation of 158 students from the School of Medicine and 103 from the Graduate School of Biomedical Sciences. The graduating students were urged to carry with them as they continue their careers the values that were imparted to them during their Baylor training.

“You have been prepared for your careers based on our mission, vision and, most importantly, our core values of respect, integrity, innovation, teamwork and excellence,” said Dr. Paul Klotman, Baylor president, CEO and executive dean, in his remarks to the graduates. “Throughout your life, you will make many decisions, and some of them will not be easy. If you use the Baylor values to make these decisions, you will have a strong foundation for making the right choices.”

Klotman emphasized that the graduates must stay true to these values, even when they encounter people in their personal and professional lives who do not share them. “The careers you have chosen require you to hold firm to your values because these are careers that offer absolute certainty of purpose, in spite of the political noise that surrounds us.

“You will have the privilege of knowing that each and every day, you are doing something worthwhile and important for society,” Klotman said.

If the graduates were looking for role models, there could be no better than the four honorary degree recipients who were recognized at the commencement ceremony.

Receiving the honorary Doctor of Humanities in Medicine degree were Dr. Marla Guerra and Liz Scott.

Guerra served for 17 years as the superintendent of the South Texas Independent School District, where Baylor College of Medicine has six partner high schools. She was instrumental in the expansion and success of these schools, which have consistently ranked among the best in the state and nation.

Scott is the co-executive director of Alex’s Lemonade Stand Foundation, created in January 2005 following the death of her daughter, Alex, of cancer at age 8. While being treated for neuroblastoma, Alex told her parents that she wanted to raise money to cure cancer in children through lemonade stands. At the time of her death, more than $1 million had been raised, and today, the foundation has raised more than $150 million for pediatric cancer, with research grants being awarded at 135 institutions, including Baylor College of Medicine and Texas Children’s Hospital.

The honorary Doctor of Letters in Medicine degree was awarded to Dr. Erin K. O’Shea and Dr. Ruth Simmons, who also was the commencement speaker.

O’Shea is the sixth president of the Howard Hughes Medical Institute and the first woman to lead the institute. She also is the Paul C. Mangelsdorf Professor of Molecular and Cellular Biology and a professor of chemistry and chemical biology at Harvard University. O’Shea was named an HHMI investigator in 2000, and she previously served as vice president and chief scientific officer of the institute before being named president in 2016. 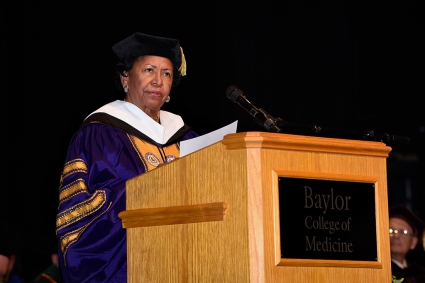 In her address, Simmons continued the theme of holding on to the values that will allow Baylor graduates to fulfill their commitment to improving human health.

“It is likely that the strengths and differences of your fellow scholars have played a considerable role in building and fortifying your intelligence and confidence about dealing with the world you have committed to helping,” Simmons said. “For such a rigorous community as this is forged through robust difference and disagreement; mutual respect and forgiveness; inclusion and engagement; open minds and helping hearts; and boundless hope and idealism. Let us thank heaven for the fact that, fortified by this community of passion and purpose, you are capable of going forward to building a stronger future, not just for the privileged few but for all of us.”

Simmons recalled her upbringing in a small East Texas town to parents who had no civil rights and little education. Despite being highly educated, she eventually learned that she could never be better than her parents, who faithfully followed their beliefs, in spite of what they endured.

“They believed worth was determined by character and how we treat and care for others. They urged their children to be mindful of how we treat others. This has been a central dictum animating my own professional life,” she said. “You will go far in life but never so far, I hope, that you lose sight of the intrinsic worth of every human being, whatever their state. Practice the human arts to assure a life lived at its most meaningful level.” 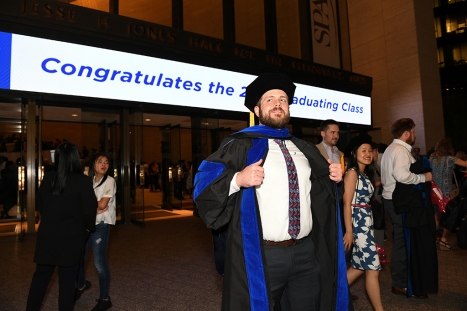 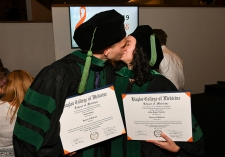 Showing off their degrees!