Service to others and to the community was the focus of Baylor College of Medicine’s 2018 Commencement, held Tuesday, May 29, at Jesse H. Jones Hall in downtown Houston, where 187 students graduated from Baylor’s School of Medicine and 77 from the Graduate School of Biomedical Sciences.

Watch a highlight video of the Commencement day events.

Dr. Paul Klotman, Baylor president, CEO and executive dean, noted in his remarks at the ceremony that students and other members of the Baylor community helped in significant ways following last summer’s Hurricane Harvey, but he urged graduates to make community involvement a part of their day-to-day lives.

“Being an active part of your community means building relationships, and it is those relationships that ultimately help bridge the gaps in cultural diversity, access to healthcare, limited educational opportunities and other social justice issues that exist today in rural and urban areas nationwide. Baylor College of Medicine graduates are defined as those with great intellect, but also with great compassion and vision for making a difference in the world,” he said.

As the graduating students prepare for their professional lives, Klotman encouraged them to turn to the event’s honorary degree and award recipients as examples.

“These honorees were carefully selected to serve as role models for the kind of leaders we have prepared you to become. Each has made phenomenal contributions that have enriched their communities, advanced science and improved health.”

The Doctor of Humanities in Medicine degree is awarded to individuals who have provided exceptional support or service, either directly or indirectly, to Baylor College of Medicine or to academic medicine as a whole and to the community at large. This year’s recipients were Dr. David Persse, physician director of the City of Houston Emergency Medical Services and professor of emergency medicine at Baylor, and J.J. Watt, defensive end for the Houston Texans and founder of the Justin J. Watt Foundation. Both men played important roles in the wake of Hurricane Harvey.

As Houston’s public health authority, Persse is responsible for the medical aspects of clinical care, quality management, disease control and public health preparedness. In accepting the award, he called upon graduates to step up to challenges in the community, such as the devastation from Hurricane Harvey.

“I want to tell you firsthand that during Hurricane Harvey and during previous disasters that we’ve had here in Houston, it was Baylor that has always been there. Baylor stepped up and literally stepped into the trenches,” Persse said. “And so to the class of ’18, recognize that you are a member of a community, you are a member of a big family and it is a bond, it is on our shoulders as physician leaders in the community to step up when those challenges face us.”

Through his charity foundation, Watt raised more than $37 million to help with recovery following Hurricane Harvey, far surpassing his initial goal of $200,000. Watt’s foundation also provides after-school opportunities for children. For these achievements, as well as for his performance on the field, Watt was named the 2018 Walter Payton NFL Man of the Year.

His work following the hurricane taught Watt the power of tapping in to “the inherent good that lies within humanity.”

“To me that gives me hope, it gives me excitement. Because if we can tap into that, there are so many beautiful things we can do with this world. And that’s my challenge to you. You guys have all done incredible things and you’re going to go on to do even more incredible things. But what I challenge you to do is to help bring out that inherent good in everyone around you. Help be that positive light. Help be that person who everybody else wants to be around and help be that energy that takes this world into an even better place. Because if we all do a little bit, we all do our part, we can truly change the world, one person at a time.”

The Doctor of Letters in Medicine is awarded to physicians or research scientists who have excelled in medicine through teaching, research or public service and whose acts have brought credit or advancement to Baylor College of Medicine or to the profession of academic medicine. Recipients were Dr. Alice McPherson, a world renowned ophthalmologist who pioneered endeavors in retina research and surgery and longtime Baylor faculty member, who was not able to attend the ceremony, and Nobel Laureate Dr. Robert Lefkowitz, the James B. Duke Professor of Medicine and professor of biochemistry and chemistry at the Duke University Medical Center and Howard Hughes Medical Institute investigator.

The Presidential Award for Excellence was presented to Dr. Hugo J. Bellen, professor of molecular and human genetics at Baylor, investigator of the Howard Hughes Medical Institute and March of Dimes Chair in Developmental Biology. This award is bestowed on individuals for their leadership in research and research mentoring.

Fist pump for the grad! 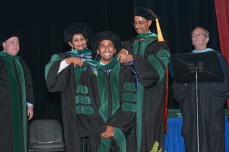 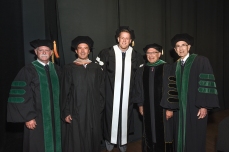 Also speaking at the Commencement ceremony were Dr. Mark Tanner, on behalf of the Graduate School of Biomedical Sciences, and Justin Cardenas, president of the School of Medicine graduating class.

Earlier in the day, a ceremony was held for two Baylor graduates who were commissioned in to the military, where they will continue their medical training. This event has become an annual part of commencement day. Congratulations to Tim Wall, U.S. Air Force, who will pursue a residency in internal medicine, Patrick Nguyen, U.S. Army, who will conduct his residency in general surgery.

In addition at the commissioning ceremony, Mackenzie Hicks received a 2018 Excellence in Public Health Award from the U.S. Public Health Service.

View photos of the military commissioning and award ceremony, and more Commencement photos.