For Dr. Sophia Banu, assistant professor in the Menninger Department of Psychiatry and Behavioral Sciences, helping people has always been her passion. With immense compassion and empathy, Banu has traveled all over the world to help people during some of the most challenging times of their lives. In the Q&A below, she discusses her most recent aid trip to Bangladesh as well as her other aid trips.

What was the purpose of your trip to Bangladesh?

Watching the news about the exodus of Rohingya refugees from Myanmar and reading the shocking headlines about their experiences, I could not stop the overwhelming need to help in whatever way I could. Along with my dear friend and colleague, Dr. Asna Matin, we partnered with Alliance for Multicultural Community Services, a refugee resettlement agency in Houston, to collect donations for the refugees.

We contacted BRAC, the local nongovernmental organization already working with the refugees at the border of Bangladesh and Myanmar, to see how best we could be of help. They informed us that they needed help training counselors at various levels. At the first level, we trained their barefoot counselors on refugee trauma, normal childhood development and how trauma affects children. Then we trained the counselors who supervise the barefoot counselors on similar topics and then finally the psychologists who oversee the whole process. We also did community-building exercises and talked about vicarious trauma and practicing self-care. I would like to thank Dr. Asim Shah, our chief of psychiatry at Harris Health. Without his support  this trip to Bangladesh would not have been possible”

Dr. Banu at a refugee camp. 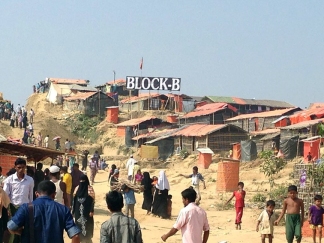 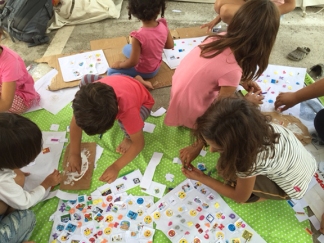 Refugee children in the their safety zone.

What was your interaction with the refugees?

We went to the refugee camps every day, except on the days that we were training. Primarily, we visited child friendly spaces in the camps that the NGO had created. In these safe spaces children could play games, color, draw and recite poems in their own language and in English.

The temporary shelters and child friendly spaces were basically huts made from bamboo sticks and tarpaulin. However, at each child space we visited we were met with children who were happy to see visitors. Even though there was not much material wise, the areas for children were filled with lots of laughter and smiling faces, but once you stepped outside of this happy place, the conditions were miserable. There are no lights, not enough water and limited food. The refugees were dependent on the aid that Bangladesh and different countries were sending.

The number of refugees in these camps is staggering. Out of the 650,000 people in the camps, I think one-third are children. If you look at refugee statistics worldwide, 49 to 50 percent are children below 18.

At the first camp we visited, you couldn’t walk from one end of it to the other. If you stood on top of one of the hills surrounding the area, as far as the eye can see, all you see are temporary shelters.

Besides helping in Bangladesh, what other aid trips have you been on?

Before I came to the United States, I lived in Nepal and worked with the Bhutanese refugees. I used to fly out to these camps every two weeks and help treat mental and physical health issues. In New York, I worked with the survivors of 9/11 during my residency, and in 2015 I went back to Nepal for three weeks to help after the earthquake.

In 2016, I was on vacation in Greece for two weeks, but I wanted to help out at one of the refugee camps in the city of Thessaloniki. For a week I did that while my husband and kids went sightseeing. Recently I worked at the George R. Brown Convention Center with survivors of Hurricane Harvey.

What was a major challenge that you faced while working in the refugee camps?

One of the challenges in Bangladesh and in Greece was language. In Bangladesh, it was not as tough because I understand Bengali so an interpreter didn’t have to explain every word, nuance and gesture to me. The problem was that the refugees spoke their own language, which was closely related to the local dialect of Bengali spoken by Bangladeshis living close to the border area of Myanmar and Bangladesh where almost all the refugees were seeking shelter.

Has there been a moment during one of your trips that has stood out to you?

Many, many moments stand out for me on all the trips. One thing that keeps me going and never ceases to amaze me is the utter resilience I witness in the people I come across. Despite the horrific hardships that they have been through, you can see them standing tall and surviving.

The other thing that stands out for me is the reinforcement I get from witnessing people from all walks of life coming out to help others who are going through so much loss and trauma. In the midst of so much negativity around the world, seeing people help each other restores my faith in humanity.

What motivated you to get involved in this type of work and how does it inform your practice here?

My work with refugees and survivors of torture started right after medical school, internship and junior residencies, when I went to Nepal for a vacation. I met a friend of mine who was a social worker, who mentioned that the NGO she was working for needed a female physician as they had many women who had been sexually assaulted and they would refuse to see a male physician.

I decided to stay in Nepal and join the Center for Victims of Torture, helping refugees who had been tortured, to treat them physically and mentally. What I didn’t realize then was that it was always in me to help people because my parents and grandparents were refugees themselves and underwent a lot of trauma. My parents and grandparents had to leave everything they owned, everything that was familiar to them, because they could not practice their religion and have basic human rights.

My passion with this population continued throughout my training and to this day. I worked in New York at the Bellevue/NYU program for Survivors of Torture as a fellow and then as faculty. After moving to Houston and joining Baylor, I started the Clinic for International Trauma Survivors, treating refugees from all over the world. I work with and train case managers from Alliance of Multicultural Community Services, Catholic Charities, YMCA, Interfaith Ministries and Refugee Services of Texas.

I train psychiatry residents to perform culturally appropriate psychiatry evaluations, and I teach them about issues of migration and issues of refugee trauma. I also participate in community outreach, help medical students with health fairs and hold wellness education classes for refugees.

What would you like people to know about helping refugees?

Please think about what refugees and internally displaced people are going through. If you feel like you can help or want to help, there are many ways that you can be involved. It does not have to be monetary – one could advocate, educate, raise awareness and create compassion.

You don’t even have to go abroad; we have lots of refugees in the Houston area that are in need of help. I work closely with organizations in Houston that help resettle refugees from different parts of the world, so if you want to help, you don’t need to go too far.